The Chick Magnet gets bigger brakes

In the past I’ve shared my adventures with my 1992 Toyota Pickup truck, a.k.a. the Chick Magnet.  I’ve had the truck for about sixteen years and it has been a journey of repair and improvements.  It got the Name “chick magnet” through its unfortunate habit of being rear-ended by women drivers.  After four times things have settled down and I have been enjoying it as my daily driver. 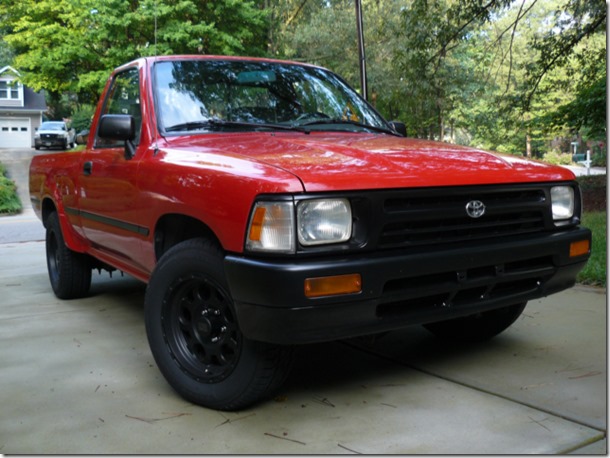 Its been re-painted, re-upholstered, it has had its suspension rebuilt, and it has a wonderful engine built by the folks at LC Engineering in Arizona.  The only area that it seemed lacking in was brakes.  The stock brakes were essentially adequate, but as more power was added to the drivetrain they developed a bad habit of pulsing and feeling a bit weak.

I looked all over for “big brake” options.  There are some nice aftermarket solutions that use Willwood calipers and larger rotors.  My problem with that solution was that it required larger wheels, usually 17” rims.  I just didn’t want to make that investment all over again since I changed to XD122 Enduros in 15” and liked the look as it allowed me to keep a wide enough sidewall that it still looked like a truck.

So what to do?  I explored several forums and learned what other Pickup owners had done.  Most of them were 4WD trucks and mine is a 2WD.  Others had swapped out their 22RE for a Chevy LS engine.  Buried in all the information was a 1 ton version of my truck that had much larger calipers and bigger rotors that just might be a bolt-on swap. Would it really be a bolt-on?  I decided to locate the parts and give it a try.

Rockauto had some 1-ton PD66 type calipers and rotors for a very good price.  If I was going to gamble I would at least try there so my budget wouldn’t take a big hit if it was a mistake.

With larger calipers that had much larger pistons than my original calipers I knew that I would need to upgrade my brake master cylinder from the stock 7/8” piston to something larger so I found a Toyota one that had a 1 and 1/16” piston to replace it with.

Then came the weekend that I had time to put the package together.  My hope was that since everything was Toyota that it would not mean fabricating a new caliper bracket or drilling and tapping new mounting holes. 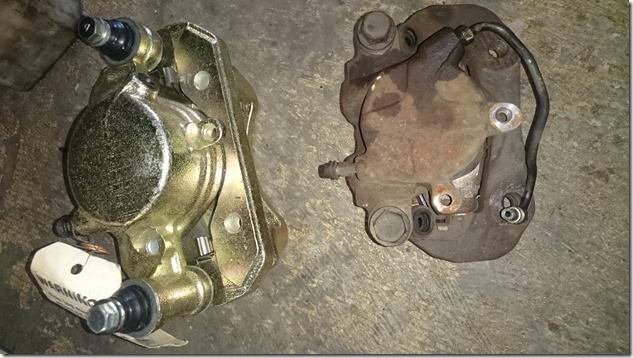 The above photo shows the 1-ton calipers on the left and the originals for my 1/4-ton on the right. The new ones are not only larger, they have a nice cadmium plating to help keep them looking good for a long time.

I removed the original sized rotors from the hub and bolted up the larger 1-ton rotors.  Everything fit like a glove and they even were not too large for the splash shields. 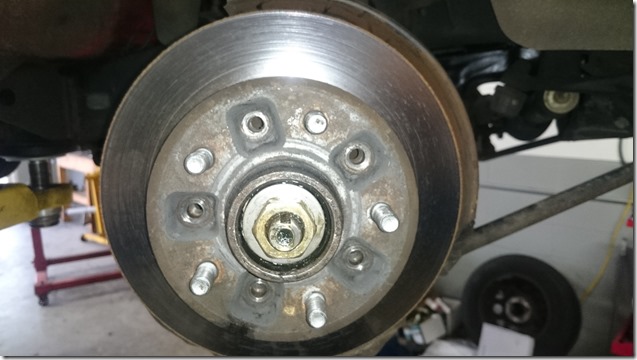 Above are the stock rotors and hub with the mounting bolts removed. 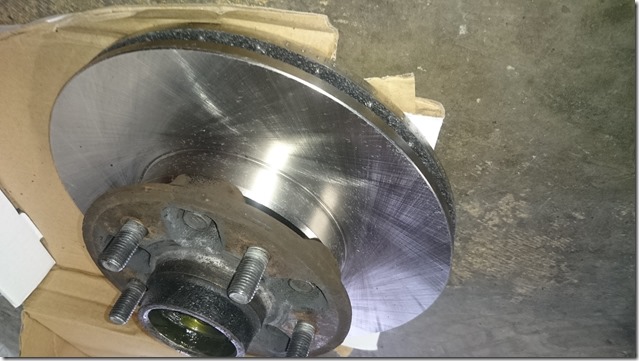 The new rotors bolted to the original hub just fine. 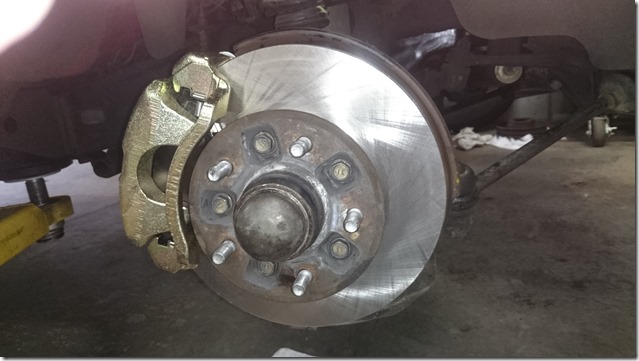 As you can see above, the big rotors still fit the factory splash shields even though they are a larger diameter. 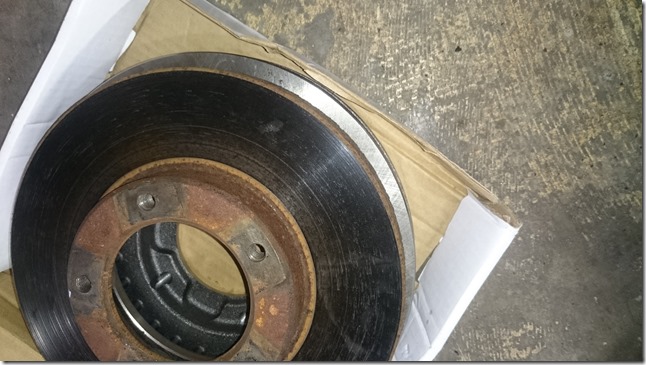 Here you can see that the 1-ton rotors are a only bit larger in diameter than the stock, but that size differential makes a big difference.

The only thing that needed modification on the splash shields was the area where the larger caliper brackets needed to bolt up.  A little work with some tin snips and a ball-peen hammer and the brackets fit perfectly. 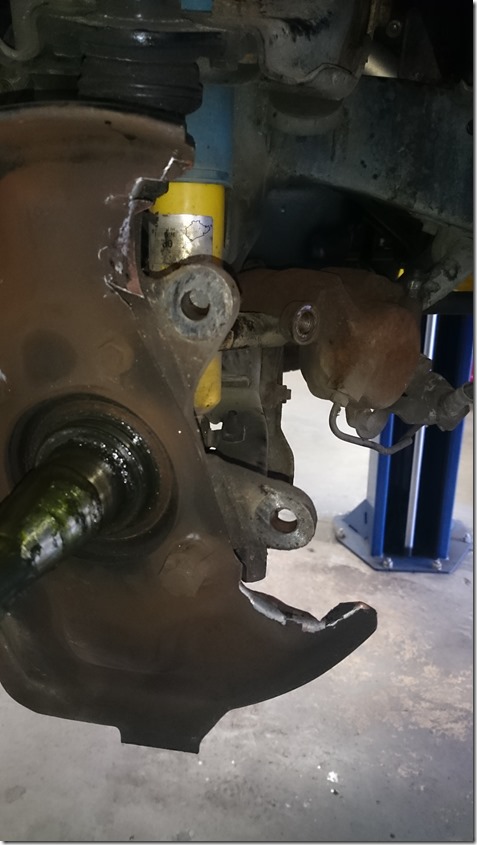 Then the new brackets were bolted up. 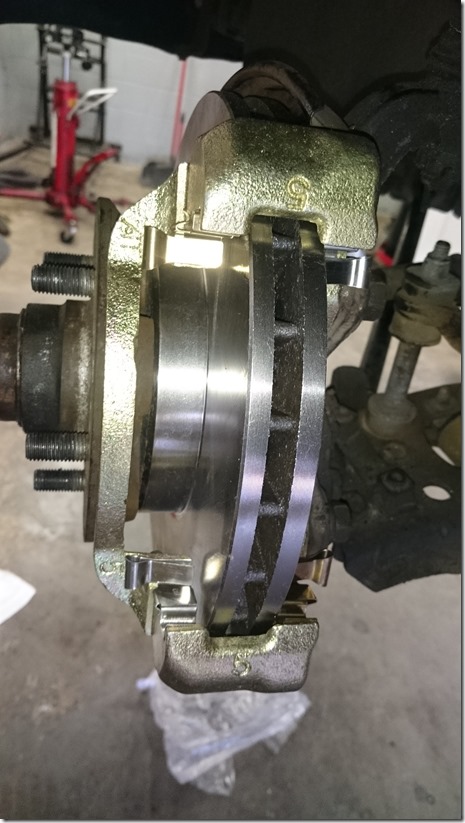 Followed by the pads and new calipers. 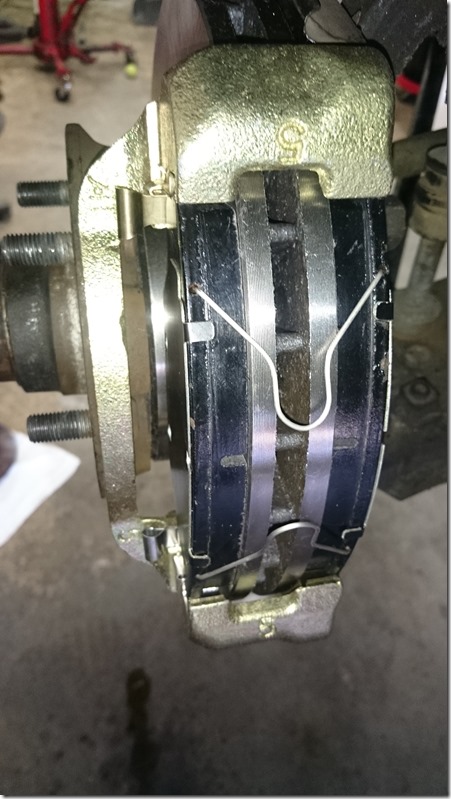 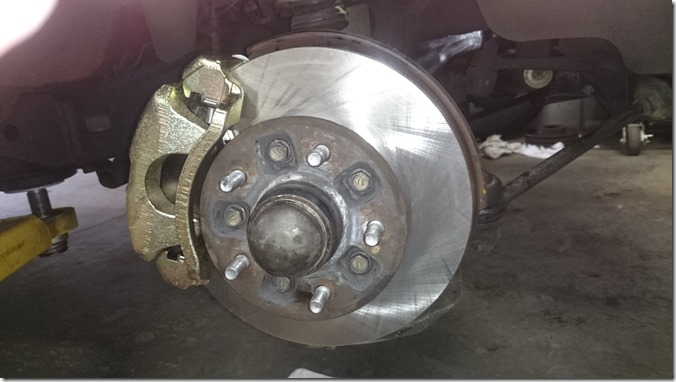 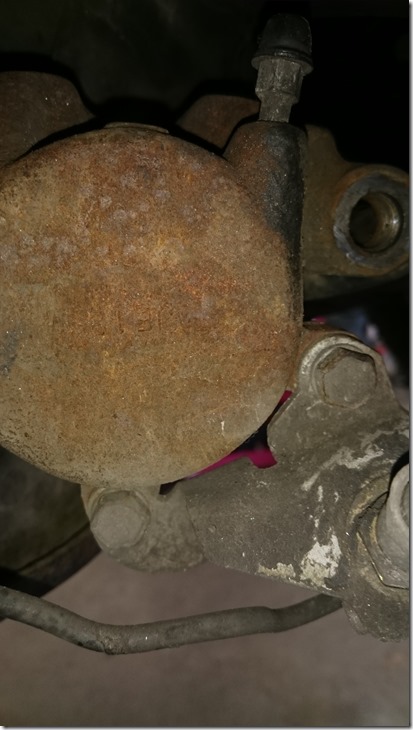 There was a different metal bracket to work with the 1-ton calipers, but Toyota no longer has them available and I was unlikely to find a 1-ton truck in a local recycling yard.  So I got new hard lines for the calipers, they were the same as the ones on the old calipers, and cleaned up the metal brackets.

What I needed was a piece to bridge the 1.75” gap between the small caliper bracket and the mounting hole on the new, big caliper.  So I fabricated the metal bridges. 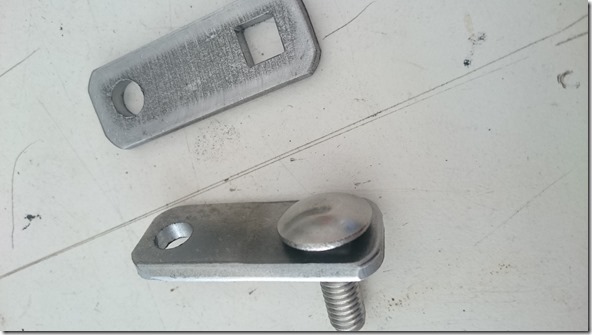 I made a square hole in one end so that I could use a smooth headed carriage bolt on one end.  A regular bolt head would have interfered with the caliper bracket mounting bolt.

A nylock nut was used on the carriage bolt so there should be no danger of it vibrating loose in the future. 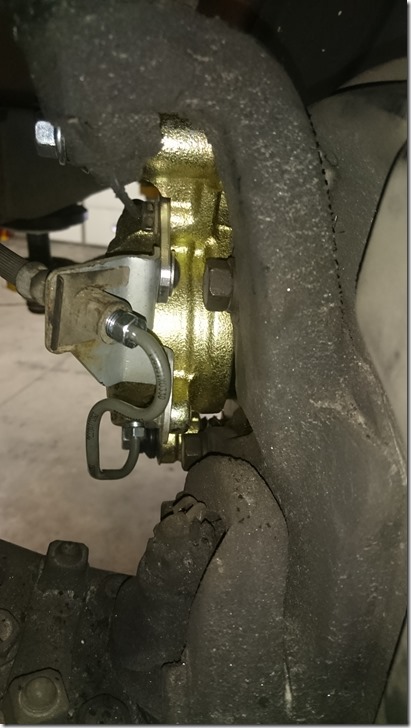 Above is another view of the caliper and the bracket bridge where you can see where it could have interfered with the caliper bracket mounting bolt.

So how are the new brakes?  Wonderful.  I get a lot more braking capacity and the pedal feel is even better with the larger bore master cylinder.

The guys at the shop joke about it being the first pickup truck that can do an “endo”.  Actually the performance is so good that the brakes are easier to modulate and the brakes are so heavy duty that I probably won’t need to replace the pads for another 100,000 miles.  They are easy to modulate and don’t grab and lock up. Instead they have plenty of reserve capacity and great pedal feel.

9 Responses to The Chick Magnet gets bigger brakes