This may come as a shock to you folks that know my feelings toward electric cars, but last week I had the opportunity to actually test drive what is probably the pinnacle of electric powered automobiles, the Tesla.

Tesla Motors has a well deserved reputation as the premier design of dedicated electric cars.  It has made the decision to place all of its patents in the public domain so as to encourage and accelerate the technology required to make electric cars a practical alternative to the petroleum powered vehicles that dominate our roads.

In the very early days of the automobile electric cars were actually a large part of the vehicle population for reasons that make a lot of sense.  They were quiet.  The early gasoline vehicles were most certainly not.  They were pleasant, for the most part, to drive.  There was no danger of breaking your arm while crank-starting the gasoline engine because there was none.  The battery technology was lead-acid similar to what you find as part of the charging system of today’s gasoline powered cars.  In the early days gasoline was not as easy to find and its quality was often suspect.  Electricity, especially in urban areas, was available and clean.  Speed was not an issue and most commutes were only a few miles.

Thomas Edison was intrigued with the idea of an electric car and understood that the key to its success was to develop an efficient and powerful battery.  He made a statement that he felt that battery technology would be optimized in a year’s time.  He was optimistic, to say the least.  It has been about 100 years and battery technology is still in the process of being perfected.  Automotive engineers and materials scientists understand that this is the key to market penetration and acceptance. Today PEV cars amount to about 0.75% of the market.

True Car did a study to better understand what factors drove the electric car market.  The conclusion was that people with higher incomes purchase battery powered cars.  Buyers of the Ford Focus EV had an average household income of $199,000 a year while buyers of the gasoline powered Ford Focus averaged $77,000 annual income.  Buyers of the Fiat 500e averaged an income of $145,000 per year versus the regular Fiat 500 owners having $73,000 average yearly incomes.

With all that to think about I joined a small group of people who were interested in test driving a Tesla sedan. 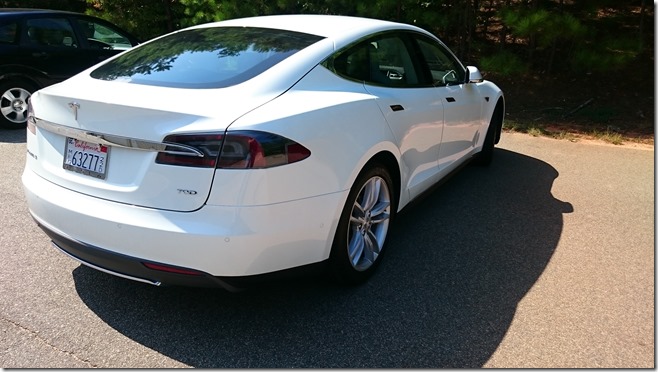 Myself and another test driver climbed in and the sales manager rode in the back seat ready to help us through any unique differences in the driving experience.  I was riding shotgun for the first half of the drive and that gave me a good opportunity to experience the ride quality and interior accoutrements. On the dashboard, between the two front seats was the world’s largest iPad.  It was a large, touch screen, graphical interface that could be used to tune the suspension, set a course, and many other things. 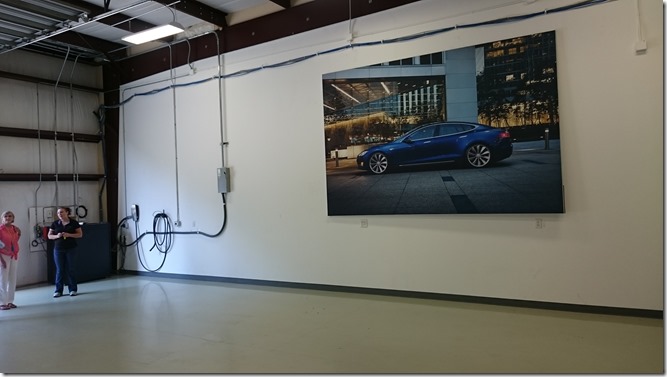 One of the first things you notice is how different the noises are in the Tesla.  Tire noise becomes much more of a factor than engine noise.  You became acutely aware of the differences in road surfaces and what changes they made to the sound level and tempo.

There is no transmission. There is a stalk to the right of the steering wheel that appears to shift you from park to neutral to drive.  Because the drive motor is electric torque is pretty much instantaneous. So is deceleration as the car relies on kinetic energy recovery when you are not on the accelerator.  When you press the brake pedal there is far greater deceleration.  As you get used to the action of the throttle pedal you can sit at many intersections without actually pressing the brake pedal. 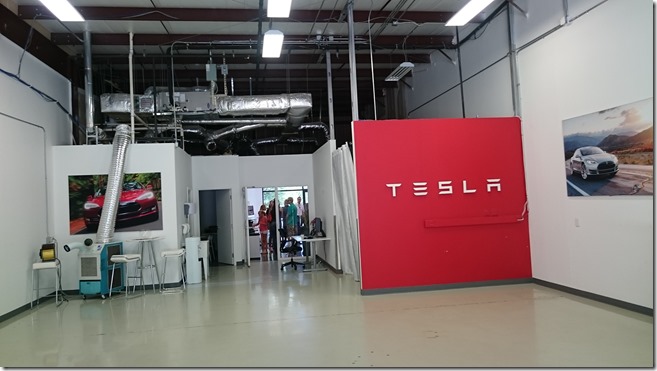 Acceleration is excellent.  On a model with AWD and more performance acceleration from zero to sixty is in the 2.8 second range.  Although a bit older, this model Tesla was no slouch, and all that torque meant that you accelerated rapidly.

Because of the energy recovery going on when not acceleration I found that you could have a lot of fun with the Tesla’s braking characteristics.  You could dive hard into a corner, ease of the accelerator, squeeze artfully on the brakes, and then accelerate with gusto through a tight corner.  It really felt very fulfilling.

I enjoyed my test drive and also had a good discussion with the service representative.  I was wondering, what with the lack of service items – what did the service department have to do on a Tesla car?

There are no oil changes, no filter changes, the brakes are likely to last the service life of the car and about the only item that might need service is the R134 refrigerant in the air-conditioning system.  Software updates can be done through the owners home Wi-Fi.

The biggest owner service complaint is noise.  With the lack of an internal combustion engine making background racket things that would be unnoticed or trivial – such as minor squeaks or rattles become areas of concern.  Its that quiet.

What about the practical range of a vehicle like Tesla?  I was assured that you could expect a range in the order of 270 miles on a full charge.  Stop and go traffic actually worked to the cars advantage with the energy recovery of braking.  Recharge time varied with your source charging.  If all you had access to was 110 volt, well I hope that you like to sleep.  But if 240v was available a dead battery could be 100% in about eight hours.  Typically you would probably drive until battery levels were in the 10-20% range so recharging could take even less time.

So am I in love with the Tesla?  Well I loved the experience, but I am still not in love with electric cars.  When the “god” battery arrives with 300 miles of range and $100/kWh, I might be tempted.  I also try to take into account the reality of what toll is taken on the environment to create the batteries and the high efficiency motors.  Nothing is perfect, and certainly not the gasoline powered brethren, but for the moment I’ll stick with the drone of the internal combustion engine.