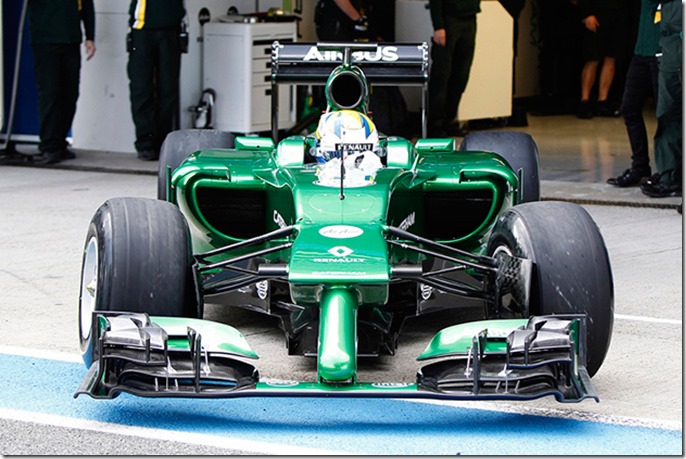 I have been a long-time fan of Formula 1.  I lived through the sixties with the no-seatbelt and drivers surrounded by fuel tank era.  I lived through the seventies with the wobbly wings attached directly to the suspension and the early aerodynamic experiments.  The eighties with their side-skirts and zero suspension travel times.  The nineties with the 1000+ horsepower qualifying engines.  Its always been more than a little crazy since it has always tried to be on the edge of the technology envelope.  But the regulations of late as well as the ones that are proposed (and likely) for the 2015 season have gotten to be just a bit wacky.

I certainly welcomed the rationality of limiting the number of engines used during a season.  The days when engines would be cranked up just for qualifying and then swapped out for a race-day motor got just a little silly.  Certainly unrealistic from a budget standpoint, but to go to a limit of four engines (power units) per driver per season is asking a bit much out of a power plant that is run on the edge.  I don’t think that we want race strategies to be based on how many penalties have been accrued.  With this year only half way through, five drivers are on their forth engine and one is on his fifth (and last).  Sixteen drivers are on their third engine.  Resorting to a sixth power unit means a ten spot penalty.  But, if you qualify so low that you can’t be put back ten places the remainder are penalized the next race.  Other power components carry a five position penalty for exceeding 5 units.  With potential gearbox changes on top of power units you might need a refresher in calculus to figure out the post-qualifying grid.

Next year’s regulations continue to impose severe limits on aerodynamic testing.  Teams can only use one wind tunnel for the entire season and the time drops from 80 hours to 65 hours a week.  Wind-on time goes from 30 hours to 25 hours per week.  Using computers (CFD) to model will be cut back on power from 30 to 25 teraflops.  Track testing is also being limited.

On race weekends hours worked by team members will also be reduced which probably means larger teams so that the more work can get done in the allotted times.  Kind of like letting nine women make a baby in one month.  We might also see the end of heated tire covers unless they hold off until the move to 18” wheels and tires.

None of these things address what is really wrong with Formula One.  The isolation of the fan base.  Unless you are a retired rock star, or current actor, or have more money than most South American countries you can’t get anywhere meaningful at a race venue.

With America’s open wheeled racing, the Indy series, you can spend $100 on a pass so that you can enter the garage area at Indianapolis Speedway.  The fans can actually connect with the teams and drivers there.  Its time to let the fans mingle with the races.  Get the trucks and trailers out of the area and let the fans see what is going on.  I mean really see what is going on.  All the secrecy that goes on is almost a joke.  After all, with all the people from media and other sources with their video gear and cameras – well, putting up a screen so the fans can’t see into the garage seems a little ridiculous.

Even Vettel appears to be sick of the current formula.  Technicalities limit innovation to the degree that not only are the fans not having much fun, but even the drivers are wondering what the point is.  Speaking of points – who had the nutty idea of doubling point on the last race of the season?