Yesterday Ed Carpenter grabbed the pole for the second year in a row.  He is the only driver owner team and lives in Indianapolis to boot.  He is a master of the ovals and has put together a top team. 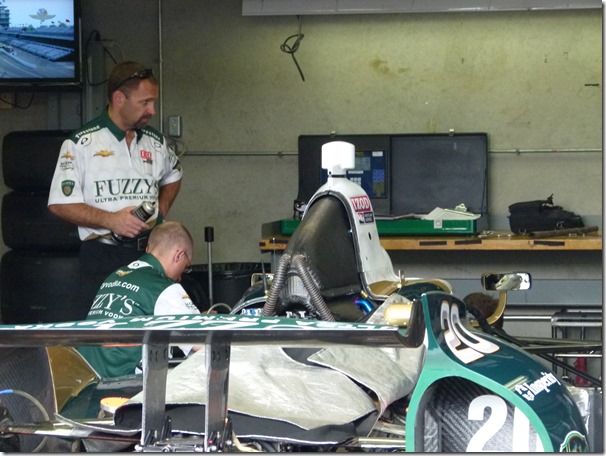 In 2012 the series changed from an older Dallarra open-wheeled chassis to the DW12.  Part of that change also involved opening up to more than just Honda engines and Chevrolet and Lotus jumped right in.  Well, Lotus tried to jump in, but hardly lasted the first season.  Chevy entered in a big way and, to many, was the dominant power plant. 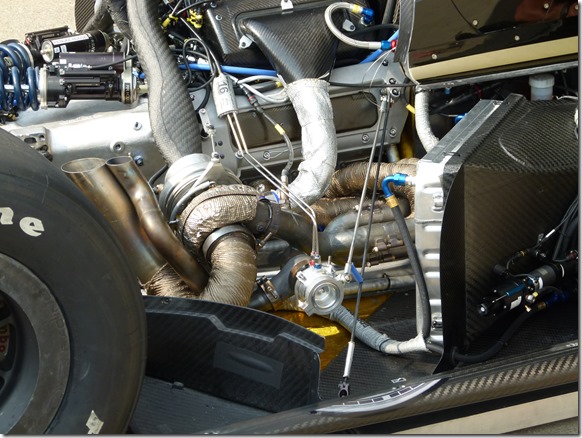 Above is the short-lived Lotus engine. 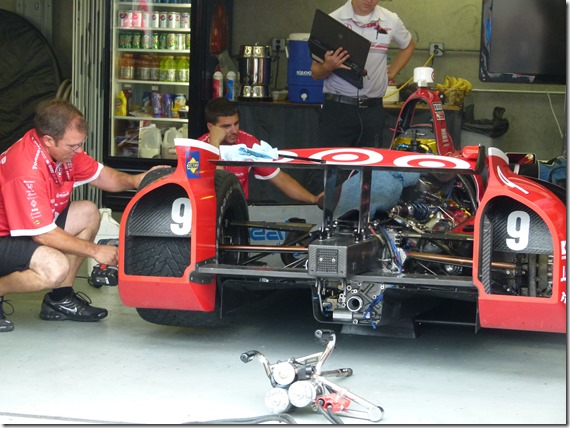 The new DW12 chassis provided a body designed to limit the danger of touching wheels by providing bodywork around the rear driven tires.  At the outset the plan was to allow teams to individualize the cars with aerodynamic changes to the bodies, but after enduring the cost of an entirely new chassis the teams balked at the additional cost, so the first couple of years the bodies have stayed identical. 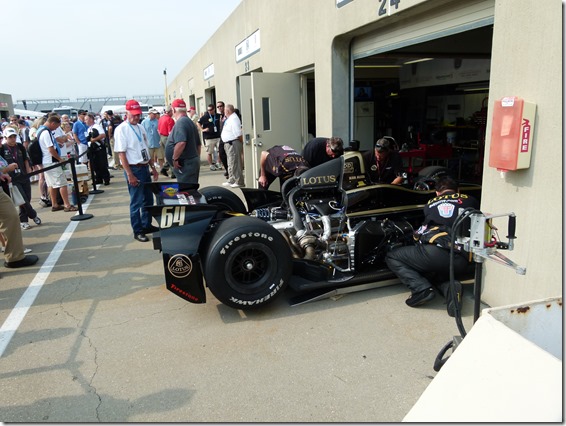 This year aerodynamic kits will be used in what the series calls the Triple Crown Tracks – Indianapolis, Pocono, and Fontana.  Last year the underbody was improved to increase stability and this year engine changes have both power plants sporting twin turbos.  Next year more changes to the underbody are in the works and aero kits will be allowed for all races.  These kits will likely cost in the neighborhood of $75,000.  One will be tailored for road and street courses and another for high speed ovals.

The new aerodynamic packages will likely provide visual distinction between teams and it is thought that cars will adopt the kit designers names for their chassis.  For example, a kit designed by Fast Body (not a real company name) will be known as a Fast Body car.

The engines are destined to get more power as well.  As a reminder these engines run on E85. 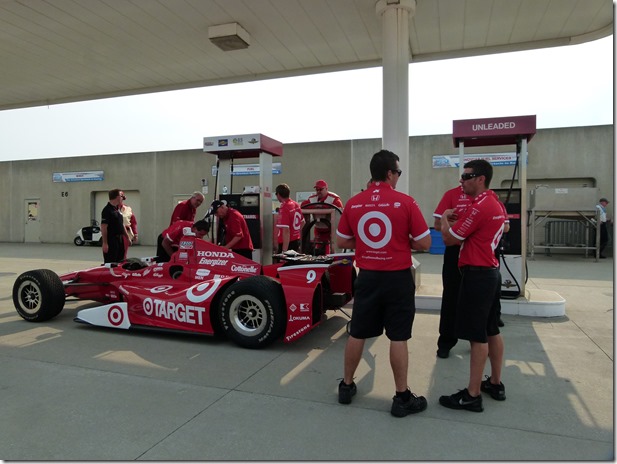 The turbochargers have been standardized to two Borg-Warner turbos and the ECU’s are produced by Mclaren.  Teams are penalized for changing engines prior to 2,500 miles of racing. 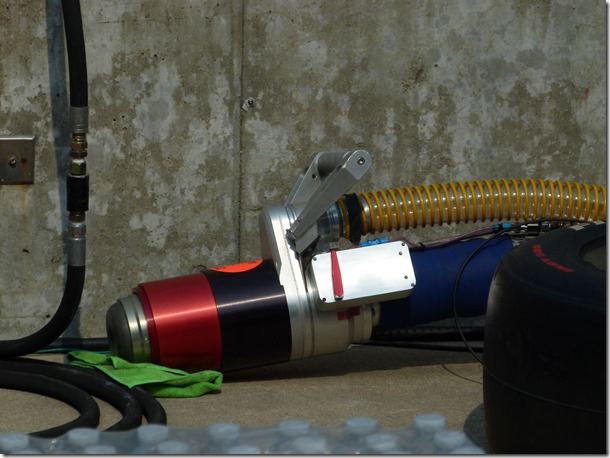 Honda has greatly enhanced the safety of pit stops with the development of its Refueling Safety Interlock.  It forces the cars transmission into neutral and keeps the driver from leaving the pit box prior to its removal.  Other forms of racing are also looking at employing it. 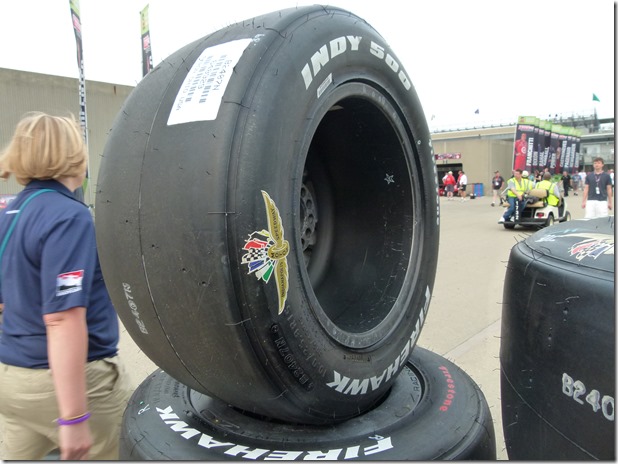 Firestone (owned by Bridgestone) is the sole tire supplier to the Indy series.  The Indy 500 can use up to 33 sets per team.  A set costs $2,600 and so that adds up to a large part of the cost and its only a rental as all tires must be returned to Firestone for analysis toward improving the designs.

Its no secret that I favor road racing, but I am greatly impressed by the pure speed and skill required to race on the ovals where the pole position this year was gained by averaging 231 mph over four laps. 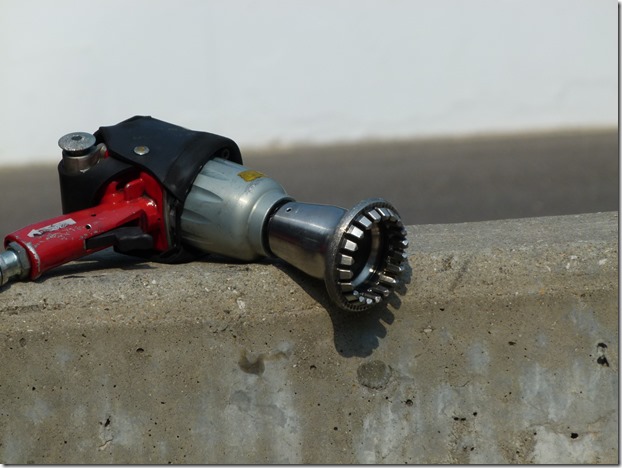 Keep your eye on the Fuzzy team and Ed Carpenter this coming Sunday. 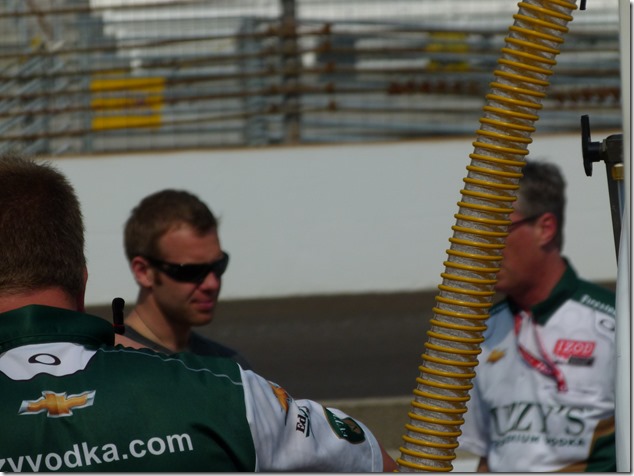