First let me make this clear that these opinions are mine.  I am speaking for Jim’s Garage, not Autoweek.  In a future issue Autoweek will compile all the Campers’ input and produce a consensus for you to critique. 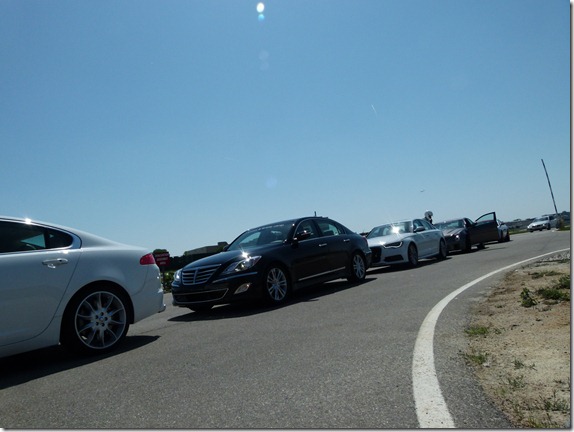 My first impression as I looked over all the cars that were parked on the lawn of the Dearborn Inn was that there was very little to distinguish one car from another.  Certainly the badging was obviously different for each car and the Chrysler has a look that says Chrysler and the CTS-V has a very distinctively angular body.  If you removed the badging from all the cars, painted them all the same, there was a certain sameness about all of them.  I don’t know if it is due to the pedestrian safety standards they must adhere to, or perhaps a result of all the car companies using the same CAD-CAM software for their designs.

I felt that the Audi A7 had done remarkably well with the design of the rear half – especially when you consider that these were all sedans.  The A7 had a pleasant slope to the the rear that gave the car a very sporty feel.  Yet, the rear passenger compartment didn’t penalize folks that sat in the rear.  Very impressive.

The CTS-V has kept a sharp edge body style long enough for it to look dated now.

Chrysler has a body design that says “I’m Big”.  Even if it is no bigger than the competition. 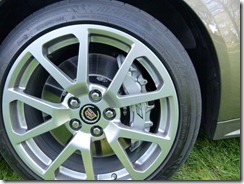 The CTS-V had massive brakes which everyone loved.  With the engine that it has, these brakes complement the car to a degree that other brands should consider.

The seat controls for the Audi A6 were very nice, but it was surprising that the A7 had manual adjustment for it steering wheel. 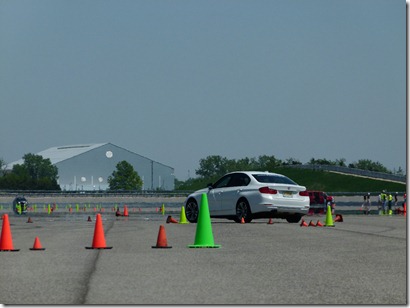 The BMW 3-series was the only manual shift car of the bunch and had manual seat adjustment, as well.  For just driving around, the center console I found intrusive.  It came up high and would force me to slide my elbow along it as I shifted.  The shifter also felt a bit BMW vague.  I have not found BMW’s to have crisp manual shifting.  When finally I was able to take the 3-series on the autocross course it really came alive.  There it showed itself to be fun and capable.  It was a joy to drive in that environment.

Last year I was anxious to test drive the Boss 302 Mustang.  It had Recaro seats and an exhaust note you could use for background music in a race track movie.  The Taurus SHO was another car that I was anxious to get in to and try out.  This one was close to a production model and our Ford driver in the right hand seat was the handling engineer.

One especially pleasant surprise was that even the pedals adjusted fore and aft.  The SHO looks good, but not really distinctive.  It is a very nice performance car, but it also feels like it has a conflicted identity.  It was too heavy to be a true sport sedan and it was too sporty to fit in as a luxury sedan.  It was all-wheel drive, but it didn’t grab you and take your heart away.  The Mitsubishi Evolution (especially the 8 and 9) did that and I think it would be appropriate for the Taurus SHO to do the same.  If you are familiar with the earlier version of the SHO you probably would expect the car to feel more like that.  It came in at 4368 pounds – about a 1000 pound more that I feel it should weigh.

The seats were nothing to wright home about.  The rear passengers even have stadium seating in the SHO.  None of the sedans had great seats.  Yes, they were better than bench seating, but none of them cradled you as a driver or passenger. 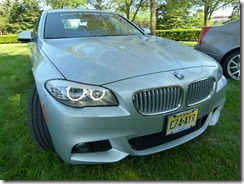 The BMW 5-series was an amazing luxury sedan.  The ZF eight-speed automatic transmission was also used in a few of the other cars, but there was something about how BMW had programed it that made it exceptional.  As in the 3-series, the center console was a bit high for my tastes, but since it was an automatic, it probably doesn’t matter.  The dead pedal was quite nice.  The ride and handling was the best of the bunch.  As is typical of BMW, they know how to bridge and blend sportiness with luxury.

The Chrysler 300 SRT8 had a good interior and handled better than the Mercedes-Benz.  That was quite surprising.  Looking back on my notes I was surprised that I rated it very high in most categories.  The steering was excellent along with the braking, power, and handling.  The CTS-V had the best braking, but the 300 was close. 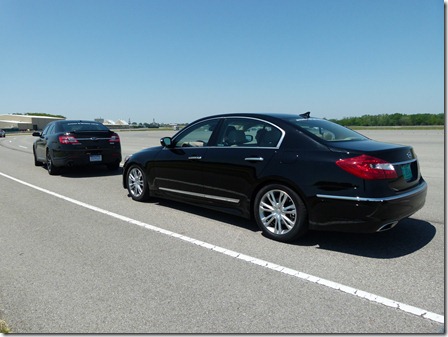 The Hyundai Equus was a very interesting car to get to know.  The car company continues to move rapidly to the top of the heap.  Its quality is excellent and is reflected in its having one of the best warranties in the industry.  Luxury is not the Equus’ middle name – it is its first second and third name.  Every appointment or feature that could be thought of seemed to be included in this sedan.  Even the rear seats had adjustability that you would usually only find in a driver’s seat.  It did let you down in the handling department.  It was the worst of the bunch.  But, with the way Hyundai is making progress I expect that won’t be a demerit in the next iteration. 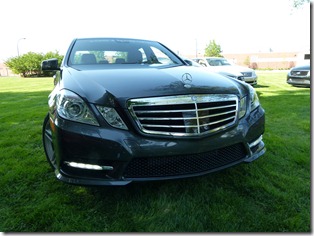 The Mercedes-Benz E-class was another disappointment in the handling category.  Over the past couple of decades M-B had had some amazing luxury sedans with equally stunning handling.  I am not sure if everyone else has just gotten better and raised the bar, or if M-B has just lost its touch.

The Jaguar XF was another all-wheel drive car.  It consistently achieved very good marks with a feeling of power that was only exceeded by the CTS-V.  Other cars might have an exceptional attribute in a particular category, but the Jaguar was very balanced across them all.

After all the test drives and pushing them to their individual limits which made the top of my list?  Frankly I was shocked to find that the Chrysler 300 SRT8 had the highest total marks.  I never felt that it had wowed me.  But the categories that I evaluated it from all came out very high.  A close second was the CTS-V.  Then it was the BMW 5-series and the Taurus SHO.  If I had each of the top cars for more time in a few more “real world” conditions I might have to modify my ranking.  My expectation was that the BMW 5-series would have topped my list hands down.

Now, if you asked me which one would I like to drive home…