The top 10 sports coupes - sort of

The photo above is how the cars were set up for our review and viewing pleasure.  The represented the Autoweek readers top ten sports coupes from a poll of readers.  Almost anyway.  There was supposed to be a BMW 135 as well, but for what ever reason BMW was not able to provide a 135 for us to evaluate. 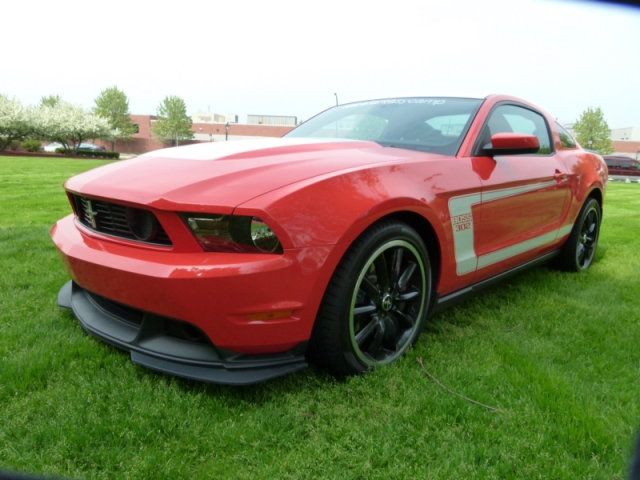 This was the new Boss 302 Mustang from Ford.  Certainly a vast improvement over the pony car of forty years ago.  Of the three American pony cars (Camaro, Challenger, Mustang) in the group it had the nicest look and an excellent exhaust note.  It still has more nose dive on braking and squat under acceleration than it deserves.  C’mon Ford it can be solved without ruining the ride – do you need some engineering help?

The shift knob was slick and could be a problem.  Having it wrapped in leather would be nice.  The rear seat passenger’s head hits the glas rear window if they try to sit relaxed and they are a six footer.  The rear view is obscured unless you fold down the rear head rests.

the Audi A5 Quatro

This was the only AWD car of the bunch and I was really looking forward to seeing how it handled.  I found that the more you pushed it in a sweeping turn the more it understeered.  Very frustrating and dissapointing.  I am an AWD fan and know that it doesn’t have to be this way.  If I was to buy one I would take it to an alignment shop and see if more negative camber could be put into the front and more negative camber taken out of the rear.

I probably would have rather driven the CTS-V, but that was not to be.

In Cadillac’s early history it was known for technological future thinking and luxury.  Cadillac was the first car with an electric starter.  That meant a lot less broken arms.    Today it is a glammed up Chevy.  It wallowed and made its way around the track showing off all of GM’s budgetary restrictions. 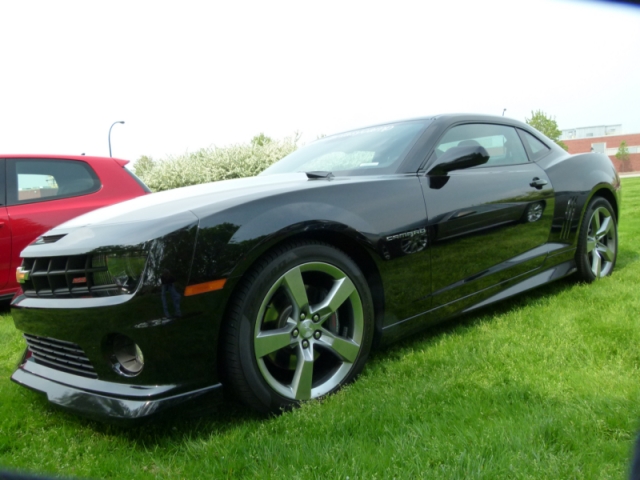 I remember growing up with the Camaro being Chevy’s flagship pony car and the Penske TransAm team trouncing the competition.  The new Camaro SS is heavy on the retro style with a very high waist line.  While I understnad what it does for the looks I really  don’t like it all that much.  Kind of like being at the bottom of a bathtub.

It was a good performer, especially for its weight (all cars seem to weigh more these days).

What I didn’t care for was the clutch.  It reminded me of a Chevy truck clutch from the late sixties.  It’s throw-out bearing rattled when you let out the clutch in neutral.  When you tried to do a smooth shift and a smooth clutch transition it was nearly impossible.  The first half inch of travel was light and then suddenly it got stiff.  C’mon Chevy – it can’t be that hard to get a clutch smooth.  Plenty of other companies manage to do it.

The other complaint was over the four gauges in the floor console.  They probably held some interesting information for the driver, but who could take their eyes off the road long enough to read what they had to say?  Hey, here is an idea!  Why not place the gauges up in the dash where they would be line of sight?

The wheels were a little funky, but for a FWD car the VW GTI was an impressive little number.  The interior was nice and the seats were very good.  It handled quite well.  Well enough to be a lot of fun.  If I couldn’t afford the BMW I would consider the GTI.  When driven on the wet skid pad it behaved without drama.

I loved how it handed the seat belt’s shoulder strap to the driver and front passenger.  In these two-door coupes that really makes a difference.  The BMW 335is also did you the favor.

It had a lot of body roll during maneuvers much like the early BMWs (say the 2002 from the 1960’s) but of course it was carrying a lot more weight.  But if you kept the faith it hung on very well and didn’t let you fail. 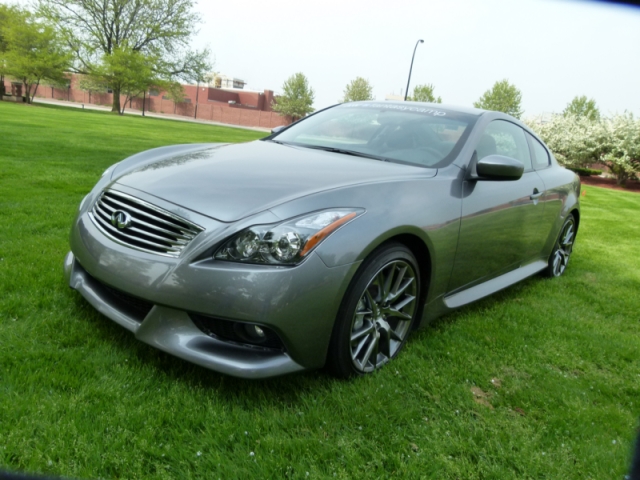 It may be from the same family, but it is not a 370Z.  The rear headroom was rather poor.  Most of these coupes were tight on head room in the back, but it was not pleasant for a six footer to try and ride relaxed in the back seat of the G37.

Handling was OK, but BMW did a better job giving you grip while providing a luxury ride. 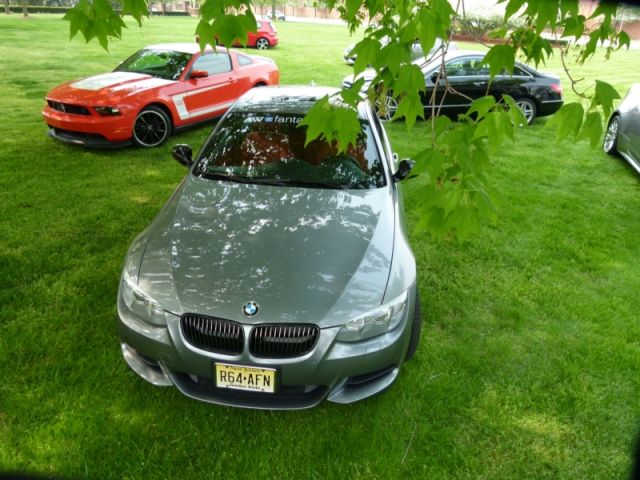 The BMW.  Every year I get so irritated with car evaluations that invariably end up with a BMW at the top of the pack.  Ugh!

Crap, I have to admit it was my favorite.  As the best sports coupe it wins in my book.  No, it doesn’t have the testosterone of a Boss 302, or Dodge Challenger.   It just has the best balance of all the cars we drove and evaluated.

We were supposed to have had a BMW 135 series car to evaluate as well. Honestly it was one car I was very excited to evaluate.  Unfortunately BMW failed to provide us with one.

I have driven BMW 135’s and have been very impressed with them. 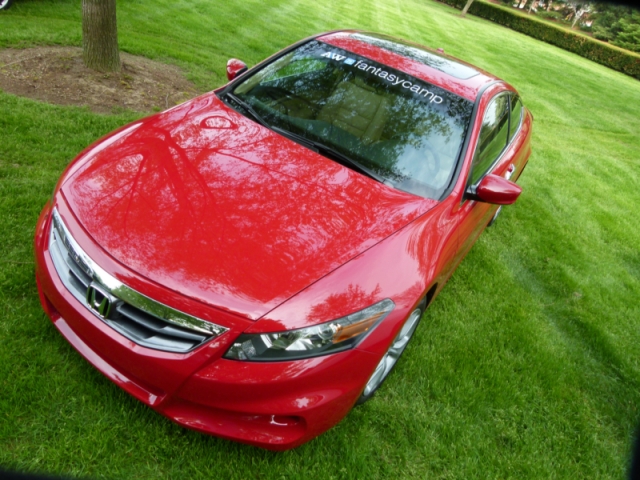 Yes, a Honda Accord.  When the BMW 135 didn’t show up this was the next car on the list of top sports coupes.  It actually was a fine car.  It was the “other” FWD car and did well, but I liked the GTI better. 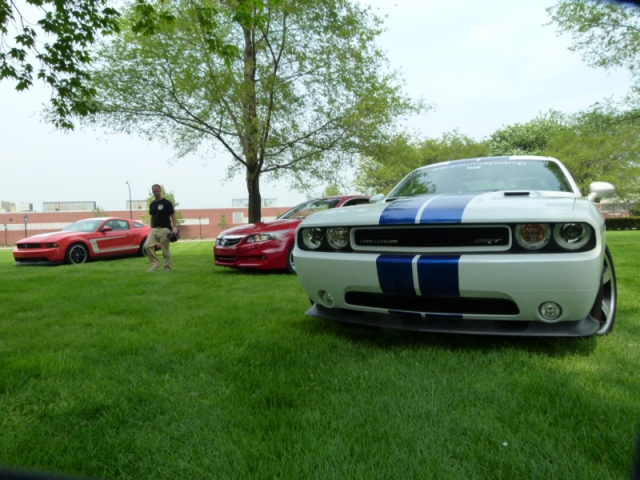 OK Mopar fans this is the one you salivate over, and why not?  Who would not like to hear the rumble of the latest hemi from Chrysler?  Well it is a tough one to hear and let me explain why.

We actually had two Challengers, one on Friday night was an automatic and the one delivered Saturday morning was a six-speed.

On Friday night we tried to record the throaty exhaust note of the hemi equipped Challenger only to become very frustrated as the rev limiter killed the engine every time six thousand rpm was approached.

Now I have experienced rev limiters on various cars before, but the Chrysler version was awful.  Most rpm limiters will allow you to hold the throttle and just kind of bounce off the limit.  the sound is a rapid bap-bap-bap-bap as the limit is hit and recovered.  On the Challenger it was like as soon as you hit six thousand rpm you would get fuel cut.  The engine would just hit the limit and die for two seconds.

This made shifting up through the gears a disaster.  Forget rev matching on down shifts.  C’mon Chrysler it can’t be that hard.

So those are my opinions.  I don’t know which vehicle will come out on top after everyone’s evaluations are tallied.  All I know is that I had a ton of fun and would do it again if the opportunity presented itself.

While we were going through all the track time there were still and video cameras all over the place.  GoPro cameras were stuck inside and outside of cars, video production teams were everywhere. 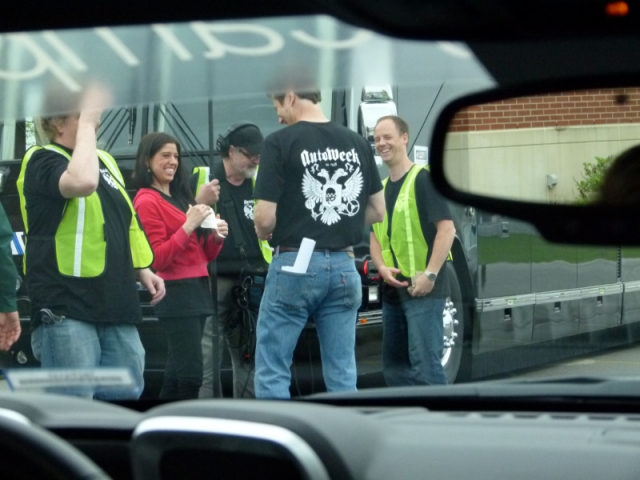 Autoweek will have a series on a cable channel (Velocity) later this year.  I am certain that they found more photogenic campers than myself so you probably won’t get any shots of  me.

Chip Foose when he wasn't driving

As mentioned before, Chip Foose was with us during the days and drove quite a bit.  He was a lot of fun to have around and very easy to have conversations with.

campers waiting for hot laps with the Ford pros

The people from Ford were fantastic.  To give us access to such a valuable facility for a day is amazing.  Then to provide professional drivers as well – it was so special.  It was hard to tell who was having more fun on the hot laps, the drivers or the campers.