Indianapolis Motor Speedway – in May – cold

It’s May and it’s the first week of practice at the Indianapolis Motor Speedway (IMS).  I have taken a few days off from Performance Chassis to fly out to the “greatest racing spectacle in the world”.  Monday was a rainy one to travel on.  In fact it rained just about everywhere except at the high altitude the airliner flew.  When I finally touched down in Indianapolis it had been raining all day there and was finally converting to drizzle.  I arrived very late in the evening at my hotel so I was quick to stash my bags and get some sleep, hoping that things would clear off and there would be some practice sessions on Tuesday.

IMS was established around 1909 as primarily a test track for the many automobile manufacturers that called Indianapolis home at the turn of the century.  A few years later it became America’s premier racing event with the Wasp winning the first race in 1911 with an average speed of almost 75 mph and using the first rear view mirror so the could dispense with the weight of a mechanic.

The Wasp with rear view mirror

Today it has become a traditional event that takes place every Memorial Day weekend.  It used to be held on Memorial Day itself, but now is held on the Sunday prior.  While the IRL has many races throughout the season for these open wheel cars, the Indy 500 is the race to participate, and hopefully win in.

I arrived at the track early on Tuesday morning, optimistically dressed in a polo shirt and jeans.  It soon became evident that things were not going to warm up at the track and the wind was persistent.  Soon trucks would be circling the track along with the one that towed the dryer.  The dryer consists of a turbine engine on a trailer with a nozzle facing the track blowing the hot exhaust across the surface and ridding it of moisture.

I headed for the museum where I could buy a jacket and get to see the displays of cars there.

The fun thing about the museum for me is to be able to see the transition of automotive racing technology in the cars that represent winners from the early 1900’s to the cars of the late turbocharged era.  So much has changed in terms of suspensions, engines, tire technology, and most dramatically, the application of aerodynamics.

With the application of wings and downforce to the design of race cars the suspensions are capable of little movement.  The tires act as the primary suspension elements via the sidewalls as the g-force generated by downforce can quadruple the effective weight of the car.

While teams waited for the track to be dried out they were kept busy setting up the car’s alignments and having the engines and transmissions checked.  Since these cars are running on a relatively smooth oval track consisting of left turns the suspensions are set up completely contrary to what would be required for a road course.  The tires are oriented so that they slant toward the inside of the track.  Seen from behind it looks out of place until you realize that the side loads of constant left turning require that attitude so that an appropriate contact patch with the track surface can be maintained.

The teams use a system of ramps and platform scales to roll the car onto as they check the suspension’s settings so it is critical that this surface is first a level as possible. 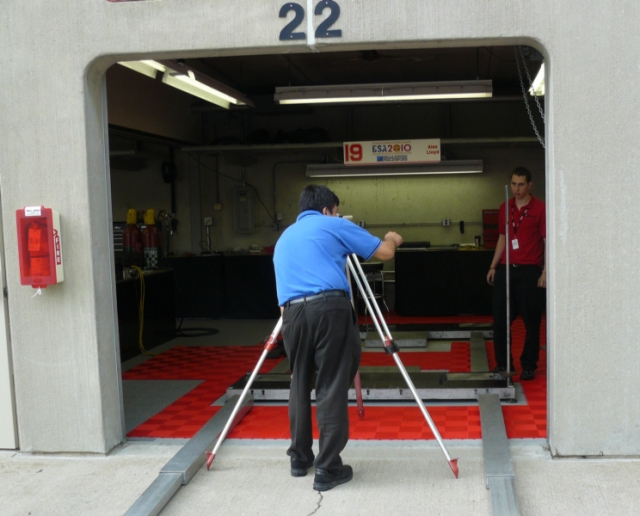 Using a transit to ensure the alignment table is flat

Once the alignment table is level the car can be rolled up the ramps and the suspension settled by rolling it back and forth and jouncing the rear wing where most of the suspension travel still exists.

The Penske team had their alignment rack made of carbon fiber, which is very impressive to see, but the aluminum racks were most common this year.

Here are a few shots of the Lotus team performing their alignment checks.

After alignments are set the car is jacked up and the Honda tech’s arrive for the engine startup and transmission check.  Honda supplies all the engines for all the cars in the race series.  They have their technicians rotate through all the teams with the goal being that all the engines are as equal as possible and reliable.  The engines are naturally aspirated and computers play an ever-present role in the startup, testing, and tuning.  ThinkPad laptops were the choice for the Honda technicians and they kept their eyes glued to the screens as the engines were started and the transmissions were taken through the gears.  These are six-speed gear boxes that are controlled via paddle shifters on the steering wheels.  As the cars went up in the gears the engines revved with small blips of the throttle and when they went down the gears there was a pop as each selection was made and a bit of the ethanol fuel was left to explode in the exhaust.

After the cars were prepped and the track appeared to dry out it was time for me to walk to the pits and watch as the teams set up shop and the cars and drivers got ready for some practice.

Blowing the moisture off the track

The yellow flag waved as the last bits of moisture were blown off the track surface by the jet turbine.  Finally it was dry enough for some cars to get out on the track.  A few times there were sprinkles, but nothing that really interrupted Tuesday’s practice.  It wasn’t until almost the end as the afternoon wind continued to pick up that EJ Viso lost it in turn one and totaled his car.

The wind coming from the north makes turn one particularly tricky as it allows the car to produce a high level of down force and therefore grip on the front straight, but when the car enters the first turn it becomes a side wind that quickly robs the car of the grip it had less than a second prior.  If a driver is not expecting the transition it can put the rear of the car into the wall and ruin a driver’s day.

Fortunately the front and rear of the cars have crush zones and the suspensions are designed to dissipate energy as they disintegrate.  Viso complained of back pain initially, but a stay in the hospital ended up with him walking fine and looking forward to driving the next day.

Indianapolis is a place I enjoy visiting every few years prior to race day, but it is such as giant tail gate party on race day that I would rather watch it at home on the TV screen.  I will follow up this entry with some others that look in more detail on the technology these race cars use.

2 Responses to Indianapolis Motor Speedway – in May – cold