This Evo is going to be getting a lot more power out of the engine and to prepare the fuel system for that I have upgraded the fuel pump.  The stock fuel pump works great within the program that the ECU comes with and the cams and turbo demands from the factory set up, but this engine will be getting a set of GSC Stage 1 cams, a much freer flowing exhaust system, an intercooler with more cooling capacity, and very likely the Tomei ARMS turbo upgrade.  As a result the fuel demands will out strip the stock pumps ability to deliver. 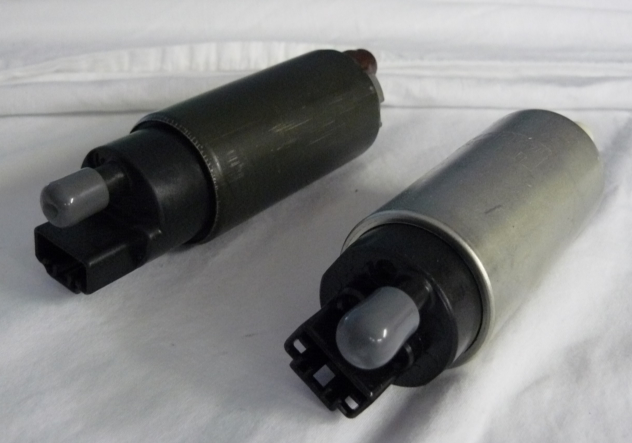 The new pump is on the right in both photos… 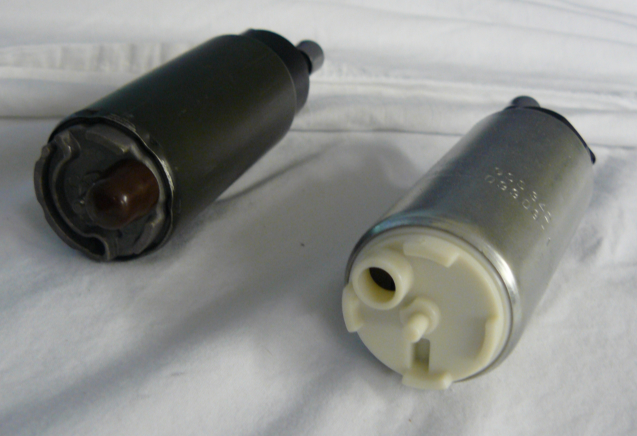 Today I swapped out the stock pump for a Walbro 255 lph pump.

It is not too hard nor is it time consuming, but you do have to be careful since you will be exposing a lot of gasoline from the tank and from the pump assembly. 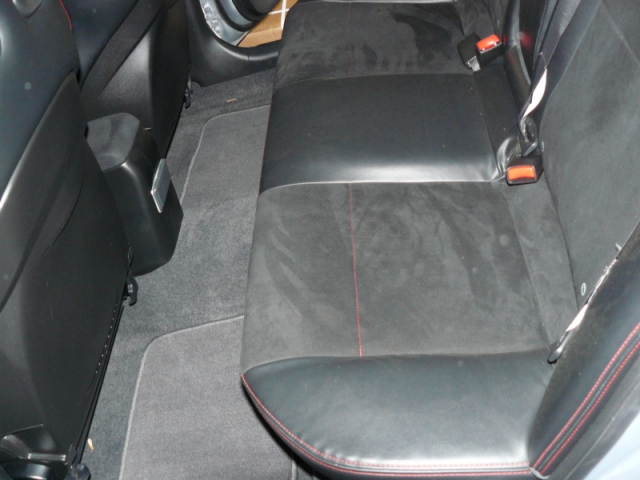 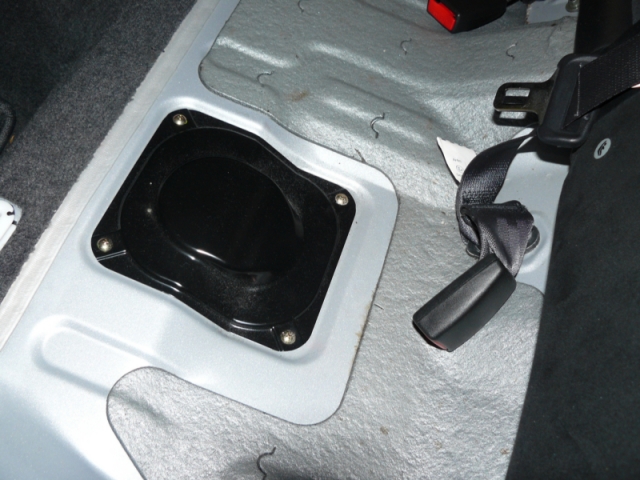 Then you need a Philips screw driver to remove the plate’s four screws.

After that, the pump’s connections will be exposed and the first one to remove is the electrical connection. 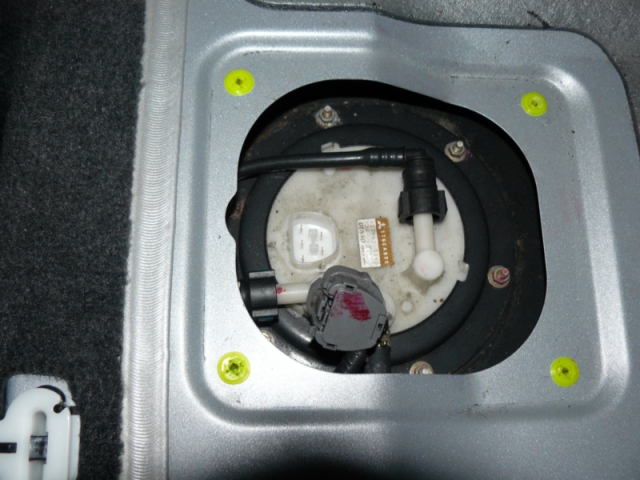 Pop off the connector and start the car up.  It won’t run long as the pump won’t be supplying fuel.  Instead it will empty the lines, which is a good thing at this point.  Then turn off the engine and remove the key.  Pop off the gas cap to relieve any pressure built up in the tank and put the cap back in place.

Then squeeze the two connectors and pull the main and secondary hoses off.  Then get some needle nose pliers and release the spring hose clamp on the last hose so you can slip the hose off.  You might need to break that hose free of the nylon connector with a small flat screw driver by gently moving it between the hose and the nylon pipe. 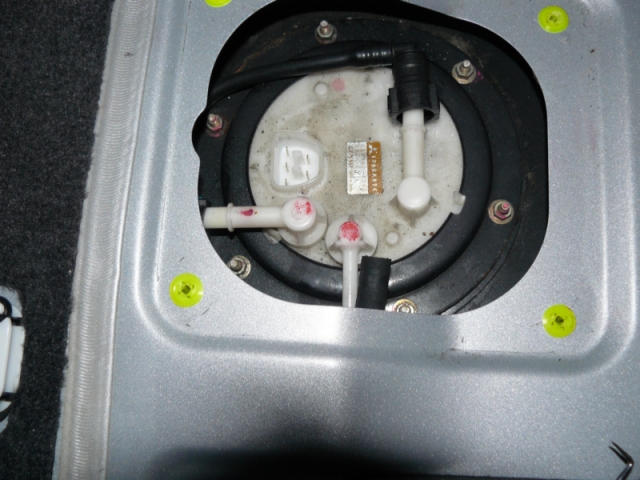 Once they are off and out of the way you can undo the eight nuts that hold the clamping ring.  Be careful and don’t lose the nuts.

With the ring loose you will be able to pull the pump out of the tank.  Have some towels and plastic handy to move it out of the car since it will be full of gasoline. 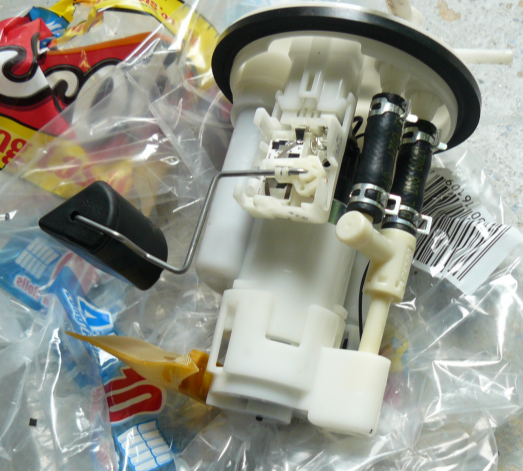 Then undo the three snaps and pull the base off from under the pump.  Be sure to hold on to the black rubber vibration isolator in the bottom of the base. 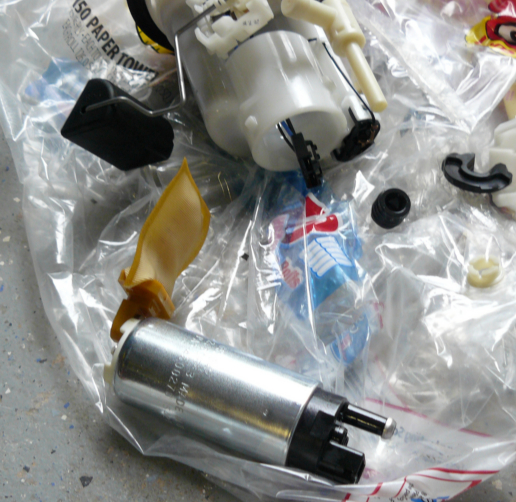 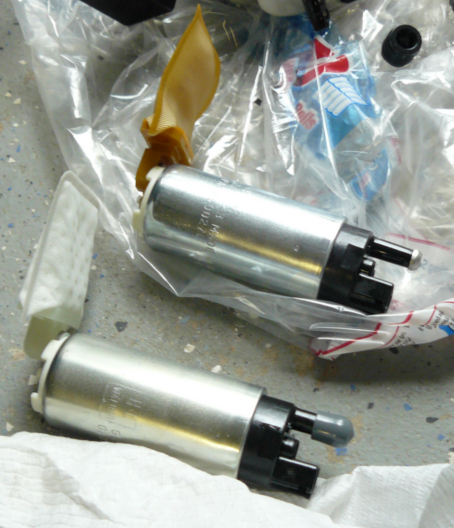 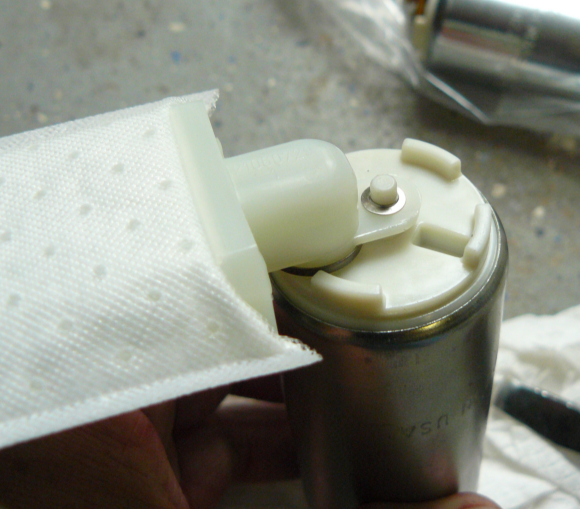 With that the black accordion seal needs to be put on after the white nylon clip and the pump can be re-inserted into the pump assembly.  Connect the wire connector to the new pump.  Clip the base on at the three points and make certain everything is back the way it should be. 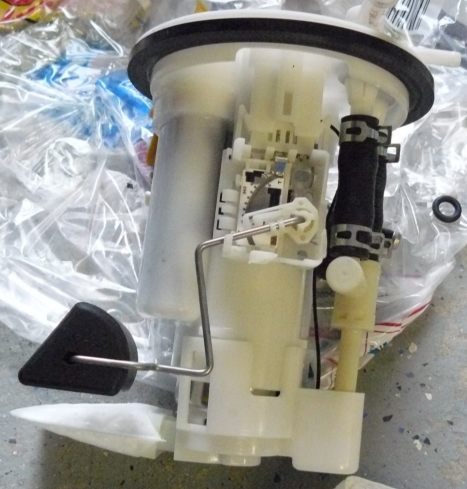 Now you can re-install the assembly being careful not to bend the float as you insert everything into the tank.  Slip on the black mounting ring and secure it with the eight nuts.  Re-connect the hoses and don’t forget the metal clamp on one of the three hoses.  Then connect the large electrical connector.  Re-examine your work making certain things are tights and right.  Then start up the car.  Remember that you will have to wait until the fuel has been distributed before it fires up.  Then turn off the engine and screw down the cover plate and re-install the back seat bottom.  You are done.

If you think you need more detailed instructions check out this LINK.