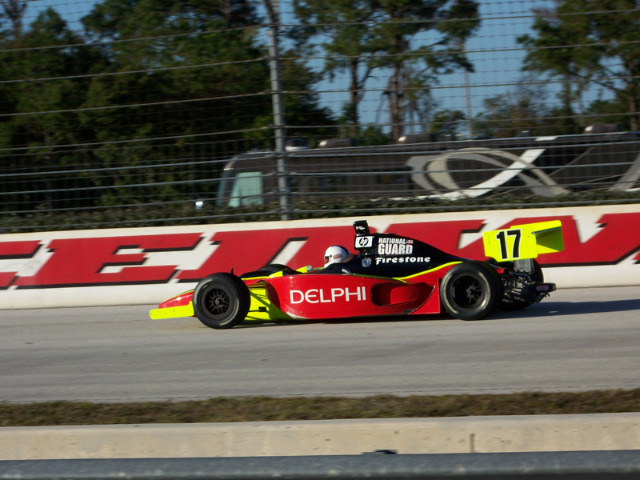 Noel and I have been all about cars and driving since…well…let’s just say, a long time.  He sent me this note on his track time in an open wheeled Indy car that was just too good not to share:

I just did the Indy Racing Experience in Orlando. It was so much fun I
can’t stop grinning. I’ve wanted to drive an open wheel race car for a
very long time and just had the opportunity. The cars are real Indy
cars (all have raced at Indy), with smaller engines, but they still go
pretty good with about 250 hp in a 1500 lb. car. (Engines will be
upgraded to about 400 hp later this year) The aerodynamics are set to
put about 500 lbs of downforce on the car so they stick like glue to
the turns on the track, a 1-mile tri-oval with turns banked at 10, 8.5
and 7 degrees.

You suit up in full Nomex, head scarf, helmet, driving shoes, Nomex
gloves. They brief you on the switches and controls and track
procedures, then strap you in, bolt on the 9″ steering wheel and
cockpit shroud, and you fire it up. You go out following a lead car at
about 6 lengths back. The driver of that car (IRL driver Davey
Hamilton in my case) shows you the line and keeps upping the speed if
you can keep up. As I ran up on him down the straights he added speed.
This is YOU driving the car, not some fake Disney ride, and the 5
releases you have to sign make it clear you are responsible for
whatever happens to you if you screw the pooch. They ask for your
health insurance provider, emergency contact, next of kin, etc.

Since the gearboxes have straight-cut gears they don’t want you
shifting, so you get a push start in 5th gear and do eight laps. My
car was actually in 4th and was hitting the rev limiter so they
brought me in, restarted me again in 5th and gave me 12 laps in all.
Because you are right down on the ground with your eyeballs about 24
inches off the pavement and the perspective is totally different from
being in a sedan or even a low sports car. It makes the line in
corners look a lot different which takes some getting used to.
Between the engine behind you, the wind and the vibration of the car,
the noise level is incredible. But the feel of the car is amazing!
These cars are *alive* and a joy to drive. The g-forces in the corners
are so much more than what you can do in a street car and with the
downforce the car really tracks through the corners, but you really
have to steer the car and focus hard while pulling a G or two. You’re
really glad you’re strapped in tight and that there’s no wiggle room
in the cockpit. What was interesting is how easy the cars are to
drive, at least at below real racing speeds. They are just solid,
stable machines meant to make going fast easy. I know that at racing
speeds in traffic it’s a whole different world, but I can see being
able to lap at 80% of racing speeds (without traffic) after a few days
of practice and some training.

It’s only 8 laps, so it’s a bit pricey for what you get at $400, but
if you’re so inclined it’s absolutely worth it. Now I gotta save up
for a real open wheel driving school. And (heh-heh-heh) it looks like
I might be coming back to this area in a couple of months, so maybe
I’ll have to do it again. This same track has the Richard Petty
Driving Experience, but those cars do nothing for me. My lap times
were well above the NASCAR guys, and I asked the Indy guys about the
difference and they said the NASCAR rides go pretty good, but the Indy
cars are all about the corners and pulling the Gs. Which they do just
fine.